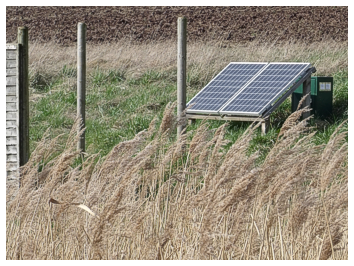 Off-mains sewage treatment systems for hotels need to be robust and able to cater for wide variations in loadings seasonally, as well as weekly and from day to day. For this busy hotel, located adjacent to the famous Donington Park Race Course, these were larger than usual and presented us with an even greater challenge.  At weekends, especially during the summer months, there are often 3-4 wedding receptions.   Interspersed at approximately six week intervals between May and October there are also 3-4 major events (e.g. Music Festival).  These take place over a long weekend when there can be an influx of up to 1500 extra people staying on site in caravans for 3-4 days.  On these occasions the population size almost quadruples rising from approximately 321 to 1,270 PE. 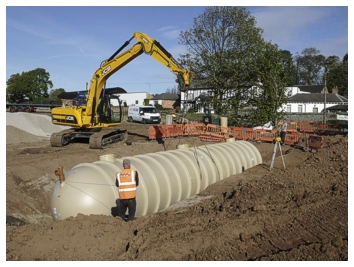 Fifteen years after the initial enquiry we were again invited to come up with proposals for an effective solution.  Our solution consisted of installing a large septic tank, for the settlement and removal of solids, followed by a large oxidation lagoon fitted with a constricted outlet which in turn is followed by a reed-bed system.  The lagoon has been designed so that during any one of the major events it will fill up with settled effluent and then drain down slowly at a more-or-less constant rate over the following 4-6 weeks before the next major event. In this way the reed-bed system will be supplied with effluent at a fairly constant rate during the summer months and the peaks and troughs in flow rates will be completely smoothed out.  The outflow from the lagoon is then dosed onto a pair of identical parallel vertical flow reed-beds, which are used alternately, followed by a single large overland flow horizontal flow reed-bed, planted with a range of different pond and wetland plants to create a more diverse ecology. The clean treated effluent is then discharged into a small stream. 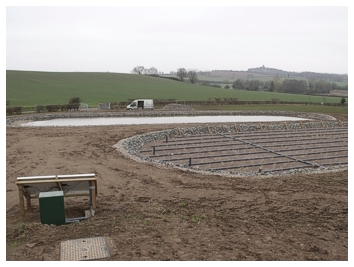 Phase 1, which consisted of installing the reed-bed system to cover the day to day operation of the Hotel, was completed in November 2011. The next phase will be the installation of the large pond with its constructed outlet.  In the meantime the additional wastewater created during the major events is partially fed to the reed-bed and tankered away.

A set of samples taken in August this year, 2013, revealed that the quality of the final discharge was much better than required by the Environmental Permit approved by the EA. with ammonia levels of below 0.5 mg/litre being achieved. 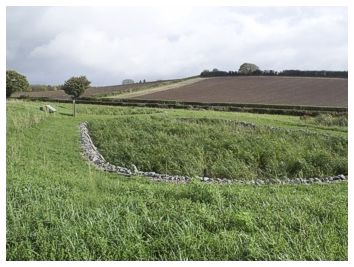 In order to install the system the owners of the Hotel had first to purchase a field on the other side of the main road passing in front of the Hotel.  This took some time but once completed gave us plenty of space and more than sufficient fall to install an economical system that runs entirely by gravity and natural energy.  Once the whole system has been completed the area will be developed into a small wildlife sanctuary with an access path from the Hotel for guests to use.

Because the system was constructed some distance from the Hotel we installed a solar powered electrically actuated diverter valve to alternately switch the effluent flow from the automatic dosing device from one of the vertical flow reed-beds to the other.  To make this work we designed and developed a simple solar energy control unit, using two solar panels with battery storage, relays and a timer to switch the supply of effluent from one bed to the other every 3.5 days.  This has worked successfully even during the last cold winter and long periods of heavily overcast winter skies. 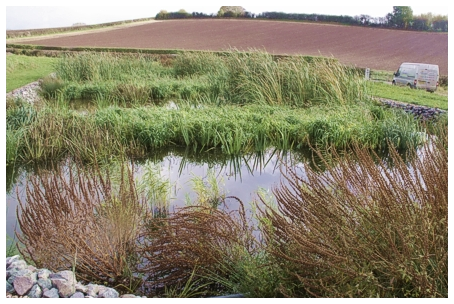 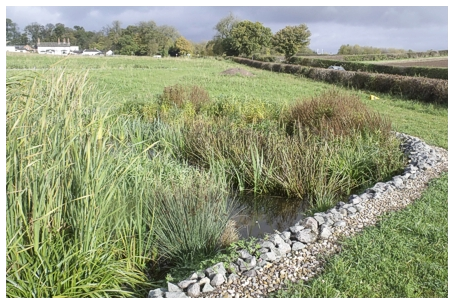