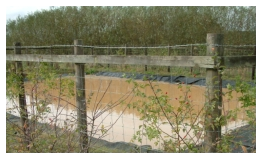 Since 2005 Purity Brewing Co, based near Alcester in the West Midlands, has been using a passive wetland system, designed by Cress Water Solutions, to treat the wastewater from their brewing operations.   At that time they were just starting up in converted farm buildings. Fortunately the farmer had plenty of land available, all sloping away from the farm buildings, making it possible to design a wetland system driven entirely by gravity. Originally it was designed for a maximum wastewater discharge of 10 m3/day.  Following the success of this multi-award winning brewery, production has more than doubled and the system has had to be enlarged to cater for up to 45 m3 of wastewater per day.

Experience with other brewery wastewaters has shown us that brewery effluent is very much stronger than is generally thought and varies widely from day to day.  Over a week the average BOD5 (Biochemical Oxygen Demand) value of the mixed effluent is generally 4,000 – 7,000 mg/litre, 20-30 times stronger than domestic sewage. 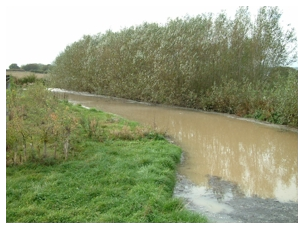 After removal of the gross solids the effluent drains into a large septic tank which also takes the foul water from the staff toilets.  Lime is added at this stage to neutralise the acidity.

In the original system the effluent from the septic tank flowed into a anaerobic pond which, at maximum design flow, had an hydraulic retention time of 20 days. Here mixing took place. From there it passed into a wetland system comprised of two broad, long parallel swale ditches dug along contour lines with low banks, densely planted with willows, along their downhill margins.  Effluent passing through the soil matrix of the banks and past the network of tree roots is collected in a “chinampa ditch”. This leads the partially treated effluent downhill to the first of two large oxidation ponds. The second pond has a large horizontal flow reed-bed at its distal end.  Both ponds are planted extensively with a variety of marginal pond plants. The system discharges to a field ditch. 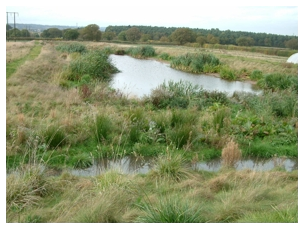 The only part of the system that is lined is the anaerobic pond. Effluent moves from one part of the system to the next solely by percolation through the surface soil layers, overflow and passage past the roots of the willows and through grasses and other vegetation that have grown up naturally.

In October 2009 we were asked to assess the system with regards to its capacity to handle a much larger loading when production at the brewery was being planned to be substantially increased.  This gave us the first opportunity to take samples throughout the system and assess its performance.  Samples were taken from the anaerobic pond, both swales, the chinampa ditch and from each of the two ponds.  Water levels in both ponds were low and there was no discharge from the system. The samples from the two ponds were, therefore, taken from the distal ends of the bodies of water in them.  The results are presented in the table below.

The above figures indicate that the simple wetland was performing extremely well 4 years after its installation.  At that time it was achieving a BOD5 reduction of better than 99.94%, an ammonia reduction of 98.26% and a phosphate reduction of 94%.

In the last couple of years the system has gradually been expanded.  The original swale ditches and banks have been increased in length and an extra one has been added. A new large pond has been excavated and added into the treatment process train. Two aerators have been fitted to this pond to compensate for not being able to make it large enough.  It is no longer a fully passive system because it would have taken up too much valuable agricultural land. 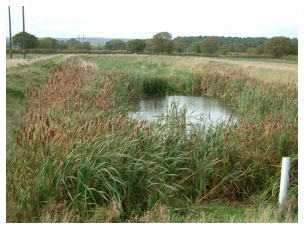