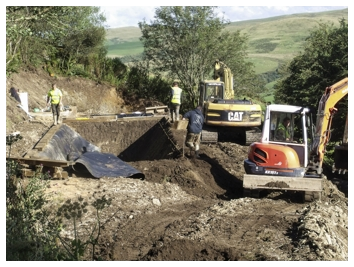 In September last year (2012) we started the installation of a Forced Bed Aeration (FBA) reed-bed system to treat the wastewater effluent from a small brewery being set up in the Welsh Mountains not far from Lake Bala.  In February this year it was completed and the brewery is just now becoming operational. 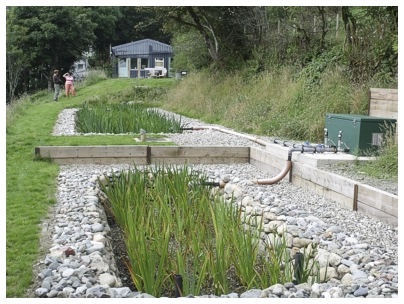 Because of the small size of the property and the steepness of the site we had to choose a constructed wetland system with as small an area as possible.  Passive systems using swale ditches, and anaerobic and oxidation ponds, such as we had used with great success at Upper Spernal Farm for another small brewery, were out of the question.  An FBA reed-bed system provided the solution, in fact, the only feasible solution for a very strong effluent in a small space. 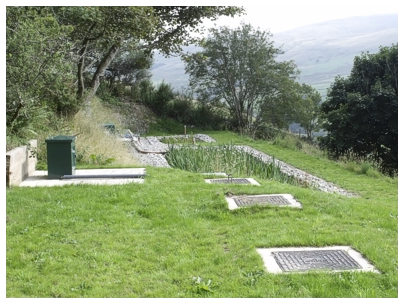 Based on our experience with a number of other small breweries the system needed to be designed to treat an effluent from initially two brews/week with an average BOD (Biochemical Oxygen Demand) of approximately 5,500 mg/litre and an initial pH of 4.5.

The system is comprised of two reed-beds in series, as the photographs show, each with forced aeration. It is designed on a modular basis so that the system can be doubled in size when production is increased to a maximum lager production of 4 brews per week in 3 years’ time.  In the meantime the system installed will provide a means of testing the effectiveness of Stage 1 of this FBA system for this type of effluent and the lessons learnt will be used to maximise the performance of the first and then to develop the second stage.

We are eagerly looking forward to the results from the samples taken of the inputs and outputs of this new FBA reed-bed system over the next few months. 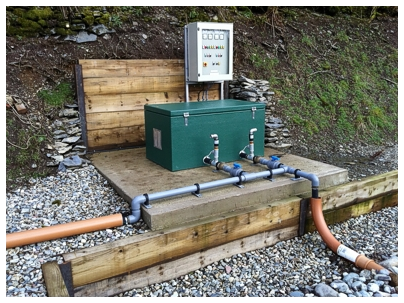