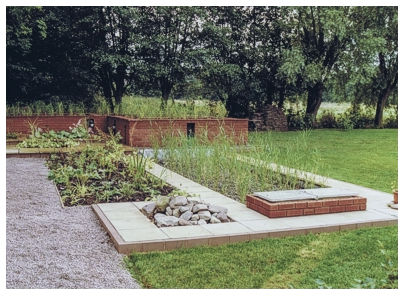 Reported by a neighbour for polluting the small stream that passed through their property, the owners suddenly found themselves threatened with prosecution by the National Rivers Authority (now the Environment Agency).  Historically the old crumbling set of farm buildings, which had been renovated into a small 5-star hotel, had discharged the effluent from their septic tank directly into the stream, as many older rural properties still do. This practice is now illegal.  After much heartache and finding very little assistance forthcoming from various bodies the owners discovered the services CRESS WATER provide.

To solve the problem we designed a flat-site combination system, using two small pumping stages, to cater for a maximum number of 24 people in the hotel.  With the owners doing most of the work and engaging various local contractors, including ourselves, for some of the more specialised jobs, they were able to install a system at a fraction of the cost they were quoted for the installation of a package treatment plant.  At the same time they added an attractive feature to their garden. On a summer’s afternoon, their guests could take tea on the lawn and have no idea they were sitting beside the Hotel’s sewage treatment plant!