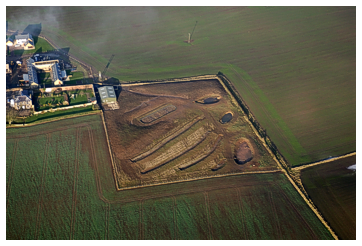 The conservation of a group of old farm buildings into a number of residential properties and the building of some new houses was being prevented by SEPA (Scottish Environment Protection Agency) who were insisting that they would not permit the discharge of treated sewage effluent from the site to the Horndean Burn because of low or non-existent flows during the summer months.

Our initial solution for this site was to design and install a reed-bed system that would have a seasonal discharge. SEPA gave their approval for this on condition that a tight consent which included low BOD, ammonia and phosphate levels was met. 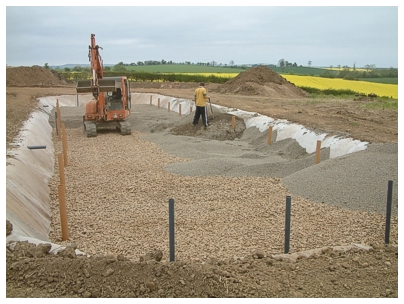 The concept behind our solution involved a system that would lose as much water as possible on the site by evapo-transpiration and percolation into the ground and store the excess in a large pond during the summer months.  In the autumn the pond was to be drained down and the system left with an open uninterrupted discharge to the Horndean until the following April.  Fortunately a 1.5 ha site was available with a good slope to the south which made it large enough and ideal for the installation of an extensive gravity driven reed-bed and wetland system. 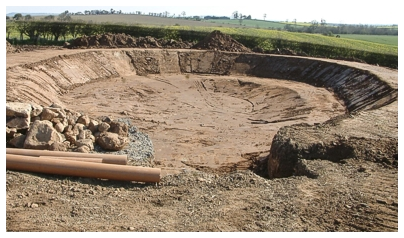 Designed to cater for up 100 person equivalents the system is comprised of a septic tank which discharges, via an automatic dosing device, to a single large vertical flow reed-bed followed by a series of long unlined swale ditches that will eventually be densely colonised by a range of marginal pond and wetland plants. The system ends with a large storage pond. The long shallow ditches are designed to cause a net loss of water by evaporation, transpiration and percolation, and to lose nutrients, particularly phosphate, by uptake for plant growth and chemical binding into the soil.  As the final discharge from this extensive system will be near river quality SEPA eventually relaxed their requirement for the system to be closed for part of the year and it is now open for discharge all year round.  So far there is no discharge off site at all. 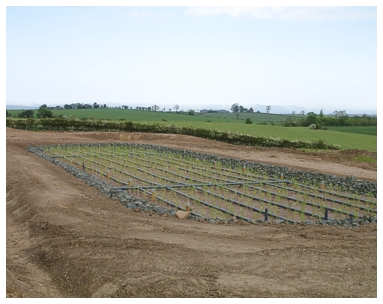 On the same site, alongside the reed-bed system, we have installed an ecologically friendly storm water run-off attenuation and treatment system comprised of, respectively, a Detention Pond and a Retention Pond to capture and treat all surface water run-off from the development site.

The earth banks along the downhill margins of the swale ditches have been densely planted with willow trees which will in time provide a source of firewood for the residents in the development. Their growth will help to remove the nutrients from the effluent travelling slowly along the swale ditches. Other parts of the site have been planted with a range of deciduous native trees and wild flower mixes. In time the site will become a small wildlife sanctuary. SEPA’s support for and involvement with this project, through its Habitat Enhancement Demonstration Site Scheme, is gratefully acknowledged.