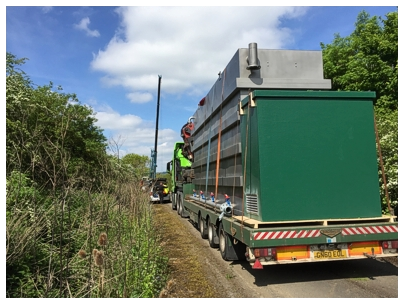 In 1998 we designed and installed a modified waste stabilisation pond and wetland treatment system for Welcome Break at their then new flagship Motorway Services Area on the M40, just east of Oxford. With some changes this system is still very much in operation today. The process pathway involves pumping raw macerated washed screen filtered sewage for initial treatment to a SAF Plant. The partially treated effluent from this plant is discharged, after settlement, into the first of a series of 4 large treatment ponds. Each pond has a sub-surface flow horizontal flow reed-bed at its end. The final pond discharges into a large balancing pond that takes all the surface water run-off from the site and discharges all wastewater off-site into a nearby stream. 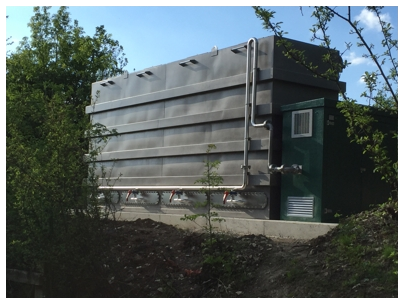 Since 2003 we have had nothing to do with the system; maintenance, repairs and modifications being carried out (or not!) by others. At the back-end of last year (2015) we were contacted again and invited to become involved once more to bring the system back into full and proper operation. It had been badly neglected for years and it was clear that any modifications made to simply keep the system going were going to be hugely detrimental in the long run. In addition, whilst the final discharge was meeting the environmental limits that had been approved for BOD and SS, the system was failing to meet the permitted ammonia consent levels. Throughout this time the pond system has shown itself to be extremely rugged. 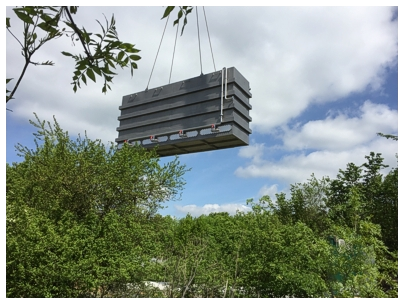 Whilst the whole system needs upgrading, in response to the immediate and urgent need to control and reduce ammonia levels in the final outlet, Welcome Break agreed for us to go ahead initially with the installation of a new SAF Plant on Pond 4. This is designed to continuously recycle the water in Pond 4 and reduce ammonia to below the permitted levels. Fortunately there was space on the banks of the pond system for the installation to take place. This has just recently been completed. We have installed the new plant on a permanent basis with the intention that it becomes an integral part of the final solution for upgrading the performance of the whole system. Our next task is to select the best available technology for upgrading and providing the initial treatment at the top end of the Pond System which also allows us to take advantage of all the benefits provided by the pond system.