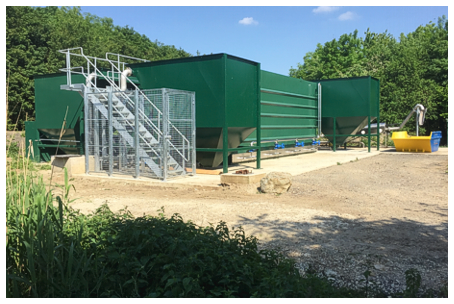 Early In 1998 Cress Water Solutions was contracted to design and install a modified waste stabilisation pond and reed-bed system in conjunction with a basic SAF sewage treatment plant to treat the wastewater from the new Welcome Break Oxford Motorway Services Area being built at the time just off Junction 8A on the M40. Discharge of the final treated effluent was to be, and still is, to a minor tributary of the River Tame. We continued to be involved with the system for some 5 years following its commissioning providing maintenance to ensure it worked to its fullest potential. In that time it became apparent that the original design figures under-estimated the loadings expected. A number of modifications, such as the addition of floating aerators, and another SAF Plant beside Pond 2, were made and some extra plant was added by others, especially to deal with the high ammonia levels.

Then, in 2015, we were re-engaged by Welcome Break to urgently bring ammonia levels into compliance with Environment Agency regulatory requirements and look at a full refurbishment and upgrade of the whole system. With the addition of a Starbucks Drive-Thru and the then imminent construction of a Pizza Express and a large extension to the Ramada Hotel there was going to be a big increase in the amount of wastewater produced on the site. To cope with the higher loadings the existing system needed to be upgraded and refurbished. Our first actions were to specify and install a SAF Plant on the side of Pond 4 and restore the SAF on the side of Pond 2 to full working order to bring the ammonia levels down and into compliance.

In the intervening years it had become apparent that the pond system had a huge buffering capacity and resilience and had been vitally important in keeping the final discharge well within compliance at least as far as BOD and SS were concerned. It was, however, nearing a critical state in its ability to handle the larger loadings it was receiving. In particular the addition of raw untreated sewage into the first pond could not be allowed to continue following the failure of the original SAF Plant.

Over the last three years, working with David Setford, from Setfords Consultants, we have upgraded the system with the installation of a Masko-zoll Pre-screening Plant, an enlarged modern SAF Plant with two parallel streams incorporating settlement tanks at the start and end, and cleaning out the reed-beds at the end of each of the four large ponds. As soon as the SAF Plants were brought into action the colour of the ponds changed from a dirty unpleasant brown to clear dark water, most of the unpleasant sewage smells disappeared, and the quality of the final discharge improved dramatically. Since commissioning in May 2018, the system has been sampled regularly every month. A typical set of results is given in Table 1 below: 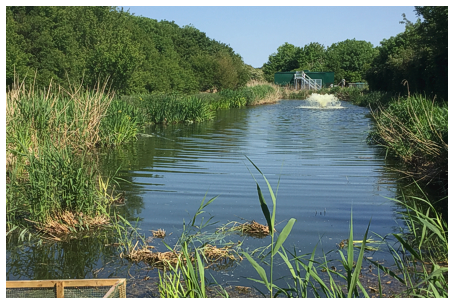 We can confidently say, with a year’s regular maintenance and experience of its operation under our belts, that the upgraded plant is exceeding expectations, producing a high quality final effluent, and should be more than adequate to cope with increased loadings over the next 25 years.

A side benefit of the system is that the site has become a wild-life haven and sanctuary. Last year more than 10 pairs of mallards raised broods of 8-10 chicks, a pair of Canada Geese raised a brood of 8 chicks and numerous coots and moorhens also raised broods. At one point there were over 40 ducklings on the 4 ponds. Numerous pairs of tufted ducks were seen but no chicks were ever sighted. A wide range of insects including butterflies and dragon flies, and smaller birds are abundant. Pigeons, red-kites, snipe, herons, pheasants, partridges and woodpeckers are frequent visitors. Deer frequent the site as evidenced by their footprints. 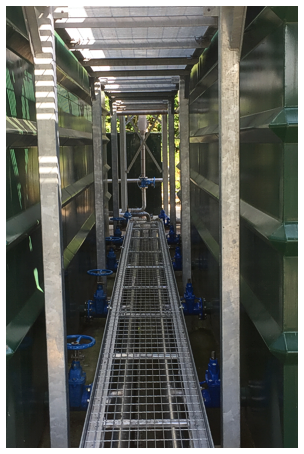